Parallels made quite the splash lately with its new remote desktop client for iOS. The product is great for getting your Mac desktop on an iOS device, but only if IT takes care to control deployment.

Parallels Access is available for free in the Apple app store, but you have to subscribe to continue using it after two weeks. When you first run the app, you'll need to register with Parallels, after which you're sent an email with instructions for how to use it and from where to download the agents. Currently, it only supports OS X, although there is a beta for Windows. 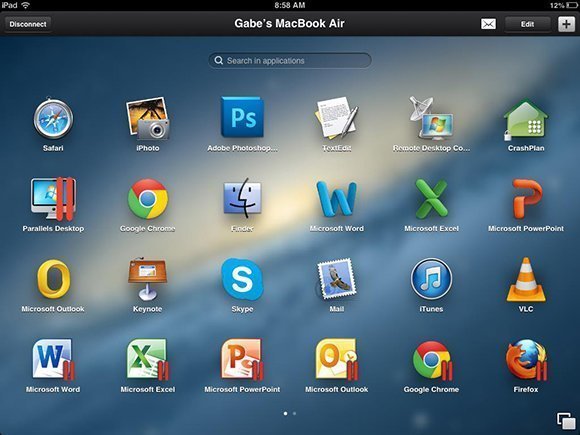 Installation itself is really easy and doesn't require a reboot (something that is uncommon among remote access packages on the Mac). After running the installer, my Mac immediately appeared accessible on my iPad. This is a service that is brokered by Parallels, which is why you can use it over mobile connections without any changes on your side. There is an agent that runs on your desktop that talks to Parallels, and when the iOS app signs in, Parallels brokers the two together securely.

You have to watch an annoyingly long video to start using Parallels Access. After it ends, you're presented with a Launcher-like screen with all your apps listed. This is really slick looking because they almost look native. When you select an app, more tutorials appear to roadblock you, though. Eventually, you're presented with your app (I chose Chrome). The experience is really nice, which alleviates my concerns about using garbage protocols or hacked-together JPEG streams.

A quick check of netstat shows no known ports being used, but there is a connection between my Mac and iPad across multiple TCP and UDP ports. That's encouraging, because it means that this was purpose-built for mobile use cases, too, rather than just making a VNC client or something. Until now, I'd only been using it via the LAN, but using it over a 4G connection is just as good.

When using a Mac, the remote desktop controls the physical desktop, so I could see an issue with privacy. Right now, as I type this from the iPad, I can watch what I type appear on my screen. Citrix wrestled with this before releasing RemotePC, and it successfully integrated a screen-blanking feature to avoid it. There is a setting to lock the computer when working remotely, but when I turned it on, it was clear that this functionality was experimental. 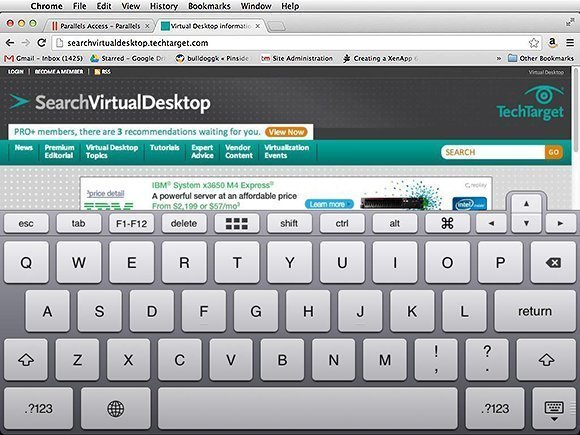 You can see a lot of effort has been placed into the controls of the app, and the keyboard is the most comprehensive remote desktop "soft" keyboard I've seen. It has arrow keys, tab, command, function keys and even a Windows key when connecting to Windows desktops. There are numerous gestures that make things like switching between apps super easy.

Is this going to replace virtual desktop infrastructure (VDI) or Remote Desktop Session Host (RDSH) in your organization? Almost certainly not.

What it will do, however, is spare you the time of setting up VDI or RDSH just for the sake of enabling one user to access Windows apps from the golf course. Deployed carefully by IT, Parallels Access could be a remarkably easy-to-deploy remote desktop tool for one-off use cases where virtualization isn't necessary or is too restrictive.

The app is free to download and free to try, but there is a $79.99 per year subscription required to use Parallels Access. This fee is per machine, so if you have more than one you'll wind up spending some money. If you already have access to Citrix RemotePC, you could get similar functionality with it and not have to pay more. If you have nothing in your environment to support this use case, though, the cost isn't so bad.

Parallels and VMware square off

It's worth considering the opposite of the IT-deployed situation, too. This is accessible through the app store, and anyone can pop in their credit card number to subscribe, so anyone with admin rights to their desktops can install their own remote desktop software. Since Access can be configured to not require a password to log in remotely, it's conceivable that a careless employee could install it on their machine, then lose their iPad somewhere. If it's unlocked, whoever finds it could have full access to the employee's PC. Yikes! The only thing keeping this situation from unfolding is probably the price tag.

There are two takeaways from this release. First, Parallels Access is a clean interface with a good performing protocol on both LAN and WAN that can address specific needs in your organization. Also, it can be deployed by users in an insecure way, especially if they have admin rights.

So, Parallels Access is a 1.0 app without a broad enterprise use case, but you have to start somewhere. That means that IT departments should both embrace it and watch out for it. There's always a catch, right?