This content is part of the Essential Guide: Complete guide to RDS management and RDSH

With all the hype around the Windows 8 and Windows Server 2012 releases, there has been relatively little talk about the changes to Remote Desktop Services and RemoteFX. Microsoft's protocol technology, in particular, comes with some welcome enhancements.

Remote Desktop Services (RDS) uses remote desktop protocols through RemoteFX to remotely deliver Windows desktops to endpoints. The updated RemoteFX in Windows 8 includes a multitouch feature, RemoteFX Adaptive Graphics and RemoteFX for WAN. Keep these changes in mind, because they should prove useful for many Windows desktop administrators.

One of the problems with previous versions of RemoteFX was that it only accepted input from the client's keyboard and mouse. This is fine if the client is working from a desktop computer, but Windows 8 is designed to run on PCs, tablets and even smartphones. As such, Windows Server 2012 RemoteFX has been updated to recognize touch gestures. This feature will allow Remote Desktop Services to work seamlessly, even when the user is working from a device that does not have a keyboard or a mouse.

A second enhancement to Windows 8 RemoteFX is Adaptive Graphics. The idea behind this feature is that it changes the way RDS renders visual elements for remote sessions.

In previous versions of Microsoft RDS, many of the visuals were rendered on the Remote Desktop Services client. The problem with this approach was that it often led to an inconsistent experience from one client type to the next because some clients are more capable than others. RemoteFX Adaptive Graphics addresses this problem by performing all rendering on the host instead of relying on client-side rendering.

If the name of this new feature seems odd, it is because host-side rendering is only part of what Windows 8 RemoteFX Adaptive Graphics does. The adaptive part comes into play with the way the visuals are rendered. Rather than relying on a single codec for graphical rendering, Windows is equipped with a number of different codecs. The operating system picks the most appropriate codec for the type of rendering that needs to happen.

Plus, in low-bandwidth environments, Windows 8 RemoteFX uses a technique called "progressive rendering." Rather than sending images all at once and giving the client the illusion that the session was hung, RemoteFX can now send bitmap images progressively. This means that the image is sent in phases, with each step resulting in a clearer image.

A third new feature Microsoft introduced is RemoteFX for WAN. Basically, this feature optimizes RDS to work better over wide area networks (WANs). However, that brief explanation doesn't do it justice.

Although Windows 8 RemoteFX makes remote sessions over the WAN more practical, you have to read between the lines to understand the full benefits of this feature. WAN links are largely defined by certain characteristics. They tend to have relatively low bandwidth, high latency, and they might be somewhat unreliable, which could mean high levels of packet loss. These same conditions can also occur on other types of networks, such as Internet tunnels or even wireless networks. 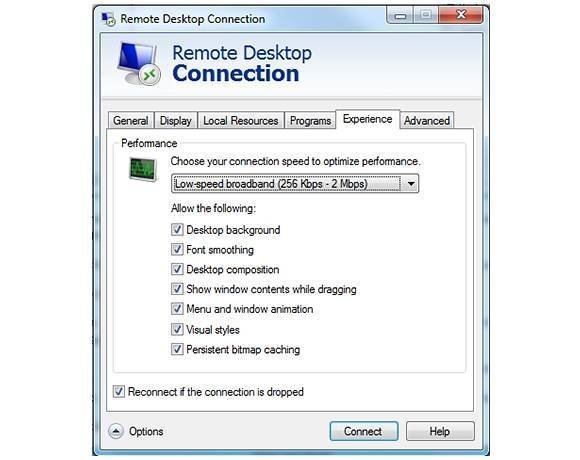 To this end, the most significant enhancement for Windows 8 RemoteFX is the automatic detection of network bandwidth.  In Figure 1, you can see the Remote Desktop Connection properties sheet's Experience tab in Windows 7. This tab required users to specify their connection speed. The problem was that users often simply did not know that speed. Plus, users might not even realize that the option to specify the connection speed exists. If the user failed to choose a connection speed, Windows assumed that a low bandwidth connection was being used, and it disabled various visual elements. 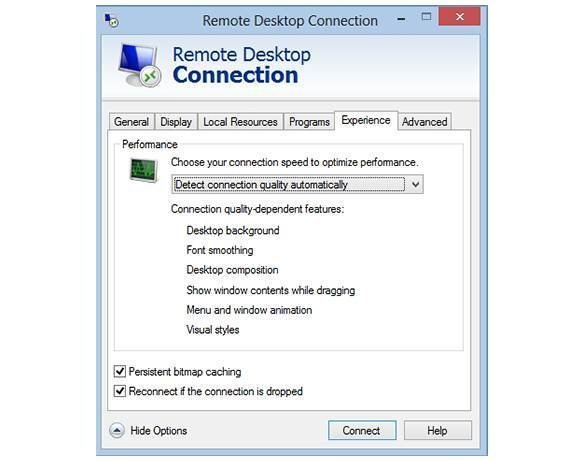 Beyond connection detection, RemoteFX for WAN offers several other improvements. For starters, the protocol is now optimized for use on networks that experience packet loss. A mechanism called Forward Error Correction is used to recover from packet losses without the need for retransmissions. Plus, even though RemoteFX for WAN is designed to use the User Datagram Protocol (UDP), it can now switch to the Transmission Control Protocol automatically if UDP is not available.