Quest Software recently released a free tool for optimizing virtual desktops in VDI environments called vWorkspace Desktop Optimizer. Not only is it free of charge, but it is also agnostic, so it works with VDI platforms including Citrix XenDesktop and VMware View.

The vWorkspace Desktop Optimizer is particularly useful for tweaking storage and I/O. Among the storage-related settings are:

Using these and other settings, Quest reports a 90% reduction in IOPS in lab testing and claims it recorded a 43% decrease in disk space consumed. In addition, Quest reports reductions in CPU and memory consumption.

Before you fall in love, it's important to keep in mind that these numbers were generated in a lab using vanilla Windows 7 images. Your mileage will almost certainly vary, especially when you factor in your applications and usage patterns. Once Quest customers start using this tool, I'd like to see the numbers that reflect their real life experiences. But, any optimization is good, right?

So, how does the vWorkspace Desktop Optimizer actually work? It turns out that it isn't a whole lot different than what many organizations do to optimize their infrastructure today.

Right now, you may have a script or .reg file that you use to configure certified tweaks and settings on your terminal servers or virtual machines. This tool is, in a lot of ways, a GUI interface for those and many other settings that you may not have ever considered. 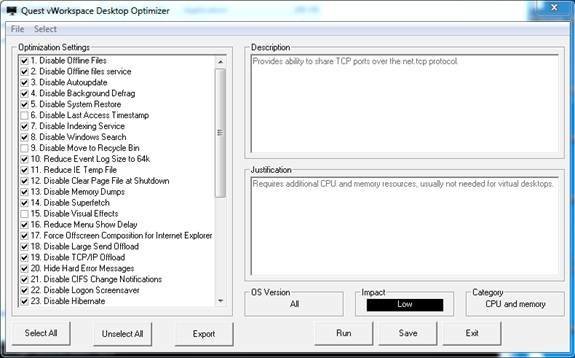 In all, there are 40 optimizations, which I'm sure will grow as more people start to use this and share their self-discovered tweaks. You can even add your own to the XML file. Each optimization is documented so that you know exactly what you're turning on or off and the reasons why you would turn it on or off. You can even see what OS versions are affected and the relative impact of the change. Applied optimizations are stored in an XML file.

Quest says that you can run this on existing machines or on template images, although running it on template images will give you more predictable results than running it in the wild. Execution is as simple as using a logon script to run the desktop optimizer .exe file.

While this may be just another way of doing what you already do, having a nice GUI should make your job a bit easier. If you're not tweaking your images at all or don't have a good way of ensuring those tweaks are made, you should at least give Quest vWorkspace Desktop Optimizer a shot since it's free and it works with anything. Follow the links to read more about it or go right to the download.

ABOUT THE AUTHOR:
Gabe Knuth is an independent industry analyst and blogger, known throughout the world as "the other guy" at BrianMadden.com. He has been in the application delivery space for over 12 years and has seen the industry evolve from the one-trick pony of terminal services to the application and desktop virtualization of today. Gabe's focus tends to lean more toward practical, real-world technology in the industry, essentially boiling off the hype and reducing solutions to their usefulness in today's corporate environments.