When Microsoft released the Windows 8 Community Technology Preview, I installed it on a spare Toshiba slate-style touch-screen notebook and ran it on a VM and discovered a few issues worth passing along.

I decided to run the Windows 8 Community Technology Preview (or beta) in a virtual machine (VM) so that I wouldn't have to devote an entire machine to it. Plus, a VM affords much more flexibility of testing. Since Oracle VirtualBox is my VM of choice, I installed the Windows 8 beta in VirtualBox.

Minimum and crucial settings
The first thing to do is upgrade to the most recent version of VirtualBox (4.1.4). Aside from the usual bug fixes and feature improvements, some degree of Windows 8 awareness has been added to the open source product. When you set up a new VM, you'll find there's a new "OS Type" option for Windows 8. (Note that both 32- and 64-bit selections for Windows 8 exist, so be sure to select the proper one.) 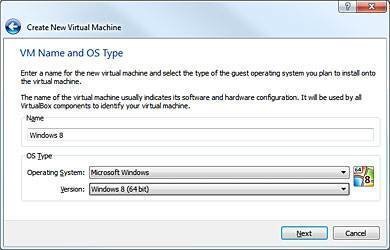 Select Windows 8 and 32- or 64-bit when setting up your virtual machine. This pre-selects certain default options. (Click to enlarge.)

The rest of the settings for your Windows 8 CTP VM should be similar to Windows 7 machine settings:

A first glimpse at Windows 8

Touch support
One thing you won't have when running in VirtualBox, at least not by default, is direct support for Windows 8's touch or gestural controls. This might be possible to emulate if you plugged in a tablet device that supports multi-touch, such as some of Wacom's Bamboo tablets, but I haven't tried this personally.

I don't know of any way to emulate touch or gestural support via software only, although if someone found a way to do that it would be a big plus. (Leave a note in the comments section below if you know how).

Windows 8 shutdown
Another thing you may notice after using the Windows 8 beta is that the power options -- suspend, shutdown, reboot -- are deeply buried in the menu system. If you want to perform a proper Windows 8 shutdown without digging for those options, press Host + H or look in the Machine menu for "ACPI Shutdown." That sends a power-off signal to the guest OS and should cause a clean shut down.

Guest extensions
The most recent version of the Windows guest extensions for VirtualBox seems to work fine with Windows 8 beta. Installing them (apart from the experimental additions) doesn't destabilize the system and the guest extensions do provide many other useful features, such as two-way clipboard integration.

One thing you may want to do is disable mouse integration (Host + I or "Disable Mouse Integration" from the Machine menu). Windows 8 pops up a special menu when you park the mouse in the lower left corner of the screen and also pops up shortcut thumbnails to other running apps when you move the mouse to the extreme left or right edge of the screen. With mouse integration on, the mouse pointer flies right past the edges and through the corners and the effect never quite works.

Specifically, booting takes so long that it's downright impractical to do anything with it. Since most of the advantages of using UEFI -- such as secure boot -- are not directly relevant to using Windows 8 in a VM, it's not crucial. 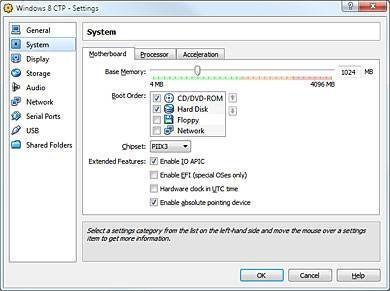 While Windows 8 CTP does boot on UEFI hardware, it isn't practical running in a VM. (Click to enlarge.)

Windows 8 expectations
Because Windows 8 is a work in progress, it's likely to be quite different from the CTP by the time it is commercially released. Likewise, Oracle VirtualBox will almost certainly go through a number of revisions to the right of the decimal point -- although it isn't likely we'll see software emulation for exotica, like touch interfaces.

Despite Windows 8 beta being a moving target, it plays well with VirtualBox, even this early on in development. I see a lot of promise for running Windows 8 in VirtualBox VMs.

oreddyhough - 18 Nov 2011 4:41 AM
Citrix demo'd a VDI delivered windows 8 VM at Synergy including touch gestures. Don't know how however - think this was through receiver for Metro. It was cool