As an avid VirtualBox desktop user, I was intrigued to hear about a number of powerful new features in version 4.1, including an easy way to clone virtual machines (VMs) -- though some of the most powerful capabilities are still rather raw and may not reach their full potential for at least a couple of revisions.

Here are some of the new features and improvements in VirtualBox 4.1.

Simple VM cloning
Making a copy of a VM in VirtualBox has never been particularly easy. You have to copy not only the virtual machine definition, but also the virtual hard drive associated with the VM. This second step is harder than it seems because of the way VirtualBox closely associates a given hard drive with a given VM.

VirtualBox 4.1 adds a VM cloning wizard to automate the whole process and make it just about idiot proof. Right click on a virtual machine, select "Clone," select a new name for the clone and the rest is handled automatically. (Geek humor: the icon that appears in the cloning progress window is a sheep.) Even a machine's saved state, if it has one, is cloned along with it.

One disadvantage of the cloning wizard is that you can't manually specify a target destination for the cloned virtual disk image. This might come in handy if, for instance, you had two physical hard drives and wanted the original .VDI on one and the clone on another. It's still possible to move the cloned .VDI manually after the cloning operation is finished, though.

New wizards for creating and copying virtual disks
In addition to the VM cloning wizard, there are now wizards to automate copy operations for .VDI. This tool not only lets you specify the destination of the file, but even lets you convert between different virtual hard disk formats. A copied virtual disk can be in .VDI (VirtualBox's native format), .VMDK or .VHD format, and the copy can be a dynamically-allocated or fixed-size volume. Note that you should only switch away from .VDI to another disk format if you really need to -- you're best leaving any volumes that will continue to be used in VirtualBox as .VDIs. 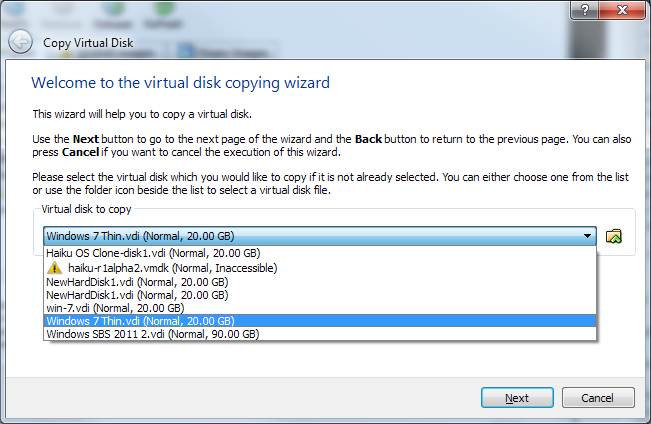 Memory boost for virtual hosts
For those of you with operating systems that support it and the hardware to run it (oh, how I envy you), VirtualBox can now support up to 1 terabyte (TB) of memory on 64-bit hosts.

My desktop is only capable of 8 GB total, so I have no way of even coming close to testing this feature out. It is mainly for IT shops running Windows Server 2008 R2 Enterprise or Datacenter editions in their x64 incarnations. (The Itanium edition of 2008 R2 also supports 2 TB.) The "memory ballooning" feature allows you to simulate hot-plugging of memory allocated to a running guest.

PCI pass-through for Linux hosts
Those of you using VirtualBox in Linux with kernel 2.6.31 or better now have access to an experimental new feature that ought to become immensely useful over time: PCI pass-through.

The idea is remarkably clever and opens up all sorts of future possibilities. You can give the guest OS direct access to physical PCI devices on the host, even if the host has no device driver for that hardware. This is a great way to access legacy hardware for which drivers only exists on older operating system platforms.

The bad news is that PCI pass-through is hemmed in by several limitations.

1.      It requires hardware support to be fully functional, via a function known as input/output memory management unit (IOMMU). Both Intel and AMD chipsets have special add-ons for IOMMU: Intel calls it "VT-d" and AMD calls it "AMD-Vi." Note also that these subsystems need to be enabled in BIOS to work properly.

2.      The Linux kernel you're using has to be built to support IOMMU.

3.      Only PCI cards with non-shared interrupts are supported by VirtualBox in the current release.

4.      Guest states for the PCI device cannot be saved or restored with any reliability.

5.      Live migration of virtual machines that use PCI pass-through will not work.

In short, it's something that has a lot of promise, but you might need to wait a couple of revisions before you can make full use of it.

Experimental Windows WDDM driver with Aero support
A common complaint about copies of Windows running in VirtualBox as guests was that the guest-additions video driver wasn't Windows Display Driver Model (WDDM)-compliant and didn't support Aero. The newest VirtualBox guest additions for Windows add some experimental support for it, but again the key word is experimental. My own attempts to use the driver in Windows 7 resulted in a garbled display, bordering on unusable. 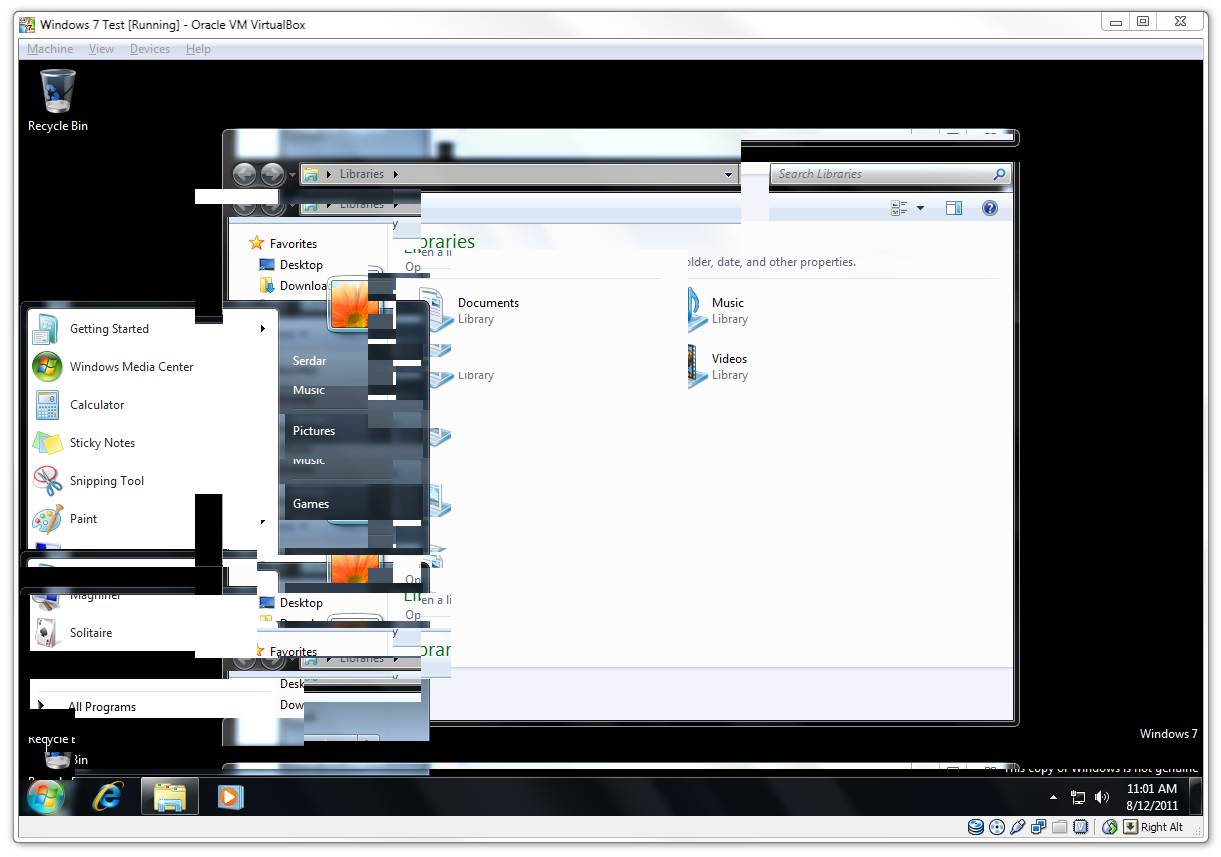 Other changes
VirtualBox 4.1 also includes a smattering of lesser, but still interesting features. A new kind of network adapter selection called "Generic Driver" lets you attach a separately written virtual network driver to VirtualBox -- although as far as I know, no one has produced drivers that make use of this ability, yet. Also new in networking is a UDP tunneling mode that allows different VMs to be interconnected across different hosts. (This mode only works with generic networking right now.) And there's now experimental support for SATA hot-plugging via the VBoxManage tool.

One feature that's not new but caught my eye anyway and is worth repeating is the execution cap function. A given virtual machine can be set to only use X% of the host's CPU to prevent any one machine from running amuck and monopolizing all the available processing.