This is the second part in a two-part series on VMware's View portfolio. Part one focuses on whether this portfolio can become a reality.

As mentioned in part one, VMware is well positioned to regain mastery over VDI through VMware View, but it is currently missing several components:

It will be some time before VMware View becomes a shipping product, but at least VMware has the right vision regarding the desktop issue: having hundreds or even thousands of DVMs running from one single core image; having only one single image to update and modify when needed; letting you access this image from anywhere at anytime; capturing and protecting all of your changes, online and offline. Tying the user to one single desktop image is the right direction for centralized desktop virtualization. If anyone can do it, it is VMware. 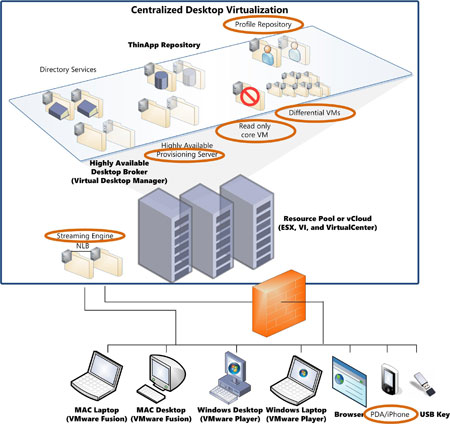 VMware founded and created the server virtualization market. It was also the first to run VDI. And, despite all of the baying hounds at its heels right now, VMware is still the market leader and intends to stay there. VMware View will definitely let the company stay there, at least in the VDI market. We're looking forward to having constant access to our own personal desktops anywhere we go, anytime we need them. Information anywhere, anytime. Now where did we hear that before?

ABOUT THE AUTHORS:
Danielle Ruest and Nelson Ruest are IT futurists specializing in IT infrastructure optimizations and IT efficiency. Danielle is Microsoft MVP in Virtualization and Nelson is Microsoft MVP in Windows Server Failover Clustering. They are authors of multiple books, the Windows Server 2008, The Complete Reference for McGraw Hill Osborne and the MCITP Self-Paced Training Kit (Exam 70-238): Deploying Messaging Solutions with Microsoft Exchange Server 2007 for MS Press. Their upcoming book will be Virtualization: A Beginner's Guide from McGraw Hill Osborne. They will be presenting on Hyper-V at the Data Center Decisions conference in Chicago in October. They are also delivering a virtual tour across the US. They can be reached at infos@reso-net.com for any comments or suggestions.