Now that the early adopters have had their fun with XenApp 5, the path has been cleared for the wait-and-see crowd to get their hands a little dirty in the sandbox.  Citrix has announced over 50 new features and enhancements, and we're going to take a look at a few of the bigger changes one at a time.

Today we're going to explore a feature called Special Folder Redirection. In Microsoft parlance, Special Folders are the ones that are presented to users in such as way as to hide the absolute file path, such as My Documents, My Computer, or Desktop. Special Folders have been around since Windows 95, and while some names have changed (Such as Documents and Computer in Vista/Server 2008), the concept remains the same.

So what is Special Folder Redirection?

Special Folder Redirection (SFR) allows for the automatic redirection of server-side Special Folders to their client-side equivalents. When a user clicks on the Documents folder in their XenApp 5 session, the folder that opens will actually be the local Documents (or My Documents) folder. When SFR is used, all file operations such as opens and saves will take place in the client-side folder.

Note: Special Folder Redirection is only available when XenApp 5 is installed on Windows Server 2008. I tried to find out information as to why, but I couldn't unearth anything. If you happen to know why or care to speculate, please feel free to leave a comment. SFR also requires version 11 of the XenApp Plugin (client).

How do I turn it on?

SFR is installed by default, but still needs to be enabled. Of the three access methods (XenApp Web, XenApp Services, and Program Neighborhood), SFR is only supported on XenApp Web (formerly Web Interface) or XenApp Services (formerly PNAgent). SFR can be enabled on one or both methods, and is as simple as a few checkboxes.

To enable SFR on XenApp Web

In the Access Management Console, browse to the Web Interface site for which you want to turn on SFR.

Right click on the site and select "Manage Session Preferences." 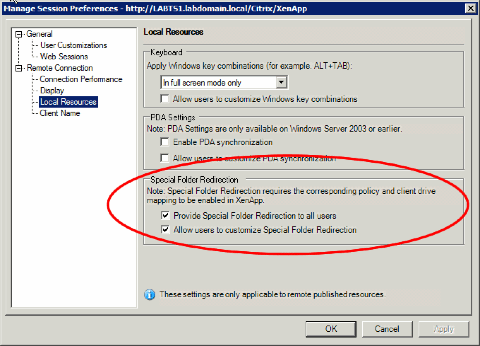 If you want the users to be able to decide whether or not to use SFR (user control?  weird), you can check the "Allow users to customize Special Folder Redirection" box.

If you chose to let the users control their SFR usage, each user will need to change a setting in their Web Interface preferences. This can be done after the users logs in, and is a single checkbox to use SFR. 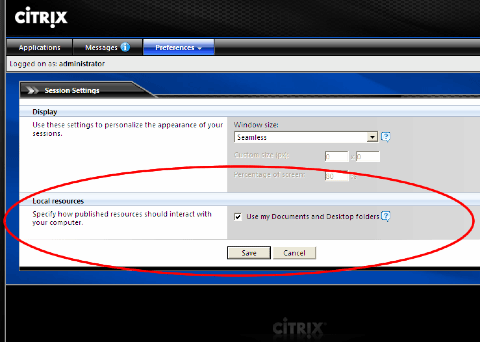 At this point, you might be thinking "Wow...those configuration options are pretty limited, and there's not much in the way of centralized administration."  You'd be right, but hang in there.  A little later we'll talk about ways to bring the control back to the admins.

To enable SFR on XenApp Service

In Access Management Console, browse to the XenApp Services site for which you want to enable SFR and ig one level deeper to select the config.xml file for that site. 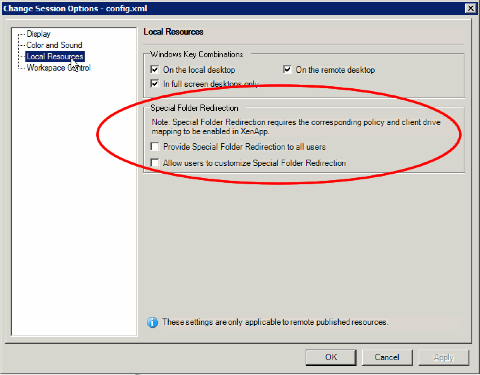 As with XenApp Web, if you allow the users to control the SFR usage, he or she will need to configure a setting on their local machine.  To do this, right click on the Citrix XenApp icon in the system tray and select Options.  Then, in the Special Folder Redirection section under Session Options, check the box that says "Use My Documents and Desktop folders." 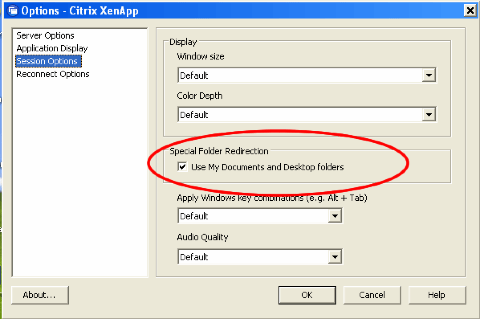 Left alone, the above options leave a little to be desired. Most importantly, you can only turn it on or off for everyone from a centralized location. And if you leave it up to the users to decide, the users themselves will have to enable SFR before they can use it.

To take back some control, you can use a XenApp policy to control SFR on a more granular level. This is an automatic #1 on the list of SFR best practices, since it's hard to imagine a situation where you'd want everyone to use SFR.

The policy allows you to turn off SFR, not turn it on, so you'll need to enable it using one or both of the methods above. When enabling SFR for use with policies, however, you should not check the box to leave the decision up to the users. After all, that's what we're trying to get control of. You can still allow the users to decide if you want, it just adds another layer of complexity.

To configure the policy, start the Citrix XenApp Advanced Configuration application (Sigh.  The CMC, or the PSMC, or the Crazy Java Console. Even the installation file is still called CMC.MSI...) and create a new policy. 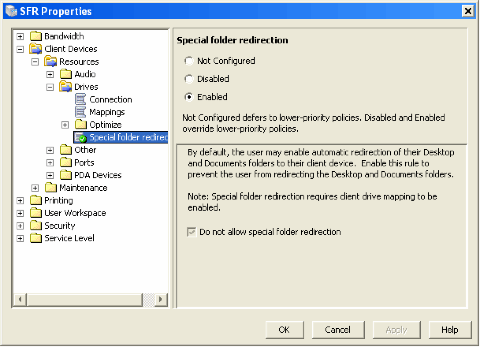 You can now apply this policy to your users or devices just like any other Citrix policy. For instance, you could exclude IP ranges that reside on the WAN so that people aren't pulling large files from their local machines over slow WAN links to the server. Conversely, you could deny SFR to users at the same site as the servers since they probably have their files stored in a network location as opposed to their local machine.

Again, using policies should be automatically included in your SFR implementation.  Without them, you'll end up spending lots of unnecessary time managing clients and users.

There are a few key things to think about as you consider rolling out SFR:

Note: This is another one of those pieces of information where details were hard to come by.  Again, if anyone cares to speculate, post your thoughts in the comments.

While researching SFR, I came across this document from Citrix that details the mapping process, which looks like this:

So what do you think?  Will you be using SFR at all in your environment?  I can think of some use cases for traveling users and remote sites, but those cases come with the risk of large files having a derogatory effect on the user's experience and the WAN link.  Local users should be saving their documents to the network, and if that is well-enforced, SFT shouldn't be needed for them.