VMware apparently did not take much a winter break, because in the past week we've seen several huge announcements. This article is going to cover the desktop-related news, but Jack has also written about Workspace One and the new direction it is taking. For this article, we're going to cover three big things: AppVolumes 3.0, Horizon Air Hybrid Mode (formerly Project Enzo), and Horizon 7. Let's dig in.

AppVolumes 3.0 gets top billing here because the announcement came out last week. VMware, along with the rest of the application management vendors, has been on a mission to simplify application management over the past few years. With this release, VMware addressed many of AppVolumes' shortcomings and introduced several new features. 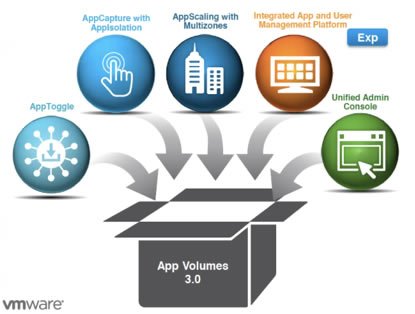 The most important addition is AppToggle, which which lets you deliver single applications from an AppStack with that contains multiple apps as opposed to delivering the entire AppStack. If you're not familiar, an AppStack is a group of applications that you deliver to users. The idea of grouping applications together for delivery is simple enough on paper, but if you only need to deliver a few of the applications in an AppStack to a user, you either had to deliver the entire AppStack anyway or create a new AppStack with just those applications. It's not hard to see that getting out of control very quickly. AppToggle alleviates the need to carve off apps into new AppStacks by allowing you to turn on/off applications. It doesn't just hide them, though (VMware thinks this approach can be exploited, which is a topic that I think would make for a GREAT BriForum session!), it actually prevents the application's files and registry objects from being merged with the base OS until the user is entitled to the application. The end result is fewer AppStacks and easier management.

AppCapture and AppIsolation are also important in this release. AppCapture gives you a way to capture applications individually into their own AppStack, then merge that new AppStack into an existing AppStack later. You can then use AppToggle to control which applications users have access to. When an application is merged into an AppStack with AppCapture (via command line), it looks at the application and the AppStack it wants to merge into and compares their files. If there is a conflict, AppIsolation kicks in to help resolve it. AppIsolation is basically an automated implementation of ThinApp, the big difference being that the isolation is only used when it's needed, not by default. In the past isolation was the rule, and integration was the exception. AppIsolation spins that around.

The remaining features focus on management across the board, even into other VMware products. AppScaling with Multizones enables you to pair repositories (basically file shares) of AppStacks with different instances of vCenter in different regions, which makes it easier to scale out your applications while providing a consolidated view across all those regions. Integrated App and User Management Platform is a middle API tier that they use to connect the backend to the new Unified Admin Console, which one of the things we got to see at VMworld. All the EUC products will eventually share the same management UI, which will tie back to a powerful backend via the API tier. If you recall Harry Labana speaking about a "cake baking" approach to management, this is the first iteration of that.

AppVolumes 3.0 will be available sometime in Q1 in one of three versions: Standard, which includes UEM and AppVolumes; Advanced, which adds in AppToggle, AppIsolation, and the scalability pieces; and Enterprise, which adds support for vRealize Ops.

Announced today, Horizon Air with Hybrid Mode (which is a mouthful, and HAHM is not the best acronym, so let's just call it "Hybrid Mode" for now), is the long awaited cloud management plane from VMware. While it's not identical to Citrix Workspace Cloud, it does set out to make it easier to deploy the management components associated with virtual desktops and applications as well as the deployment of the desktops themselves. It leverages select vSAN-ready nodes that are placed on-premises that connect to the Horizon Air with Hybrid Mode service. Admins connect to the service to manage desktop pools, and users connect to it as their broker. Because it's a cloud service, it's always up-to-date.

Horizon Air with Hybrid Mode is not intended to work with traditional on-premises Horizon deployments. The service leverages Horizon Air, so if you use that on-premises, you could move your management to Hybrid Mode, but for the moment it seems that this is for net new deployments that use vSAN-ready nodes and HCI appliances. Future releases should see support for cloud services beyond Horizon Air.

Horizon Air with Hybrid Mode retails for $16 per named user, per month ($26 per concurrent user) if you already have licenses for vSphere, vCenter, and vSAN. Those prices assume that you already have VMware virtualization software, but if you don't you can add on a few bucks to the subscription to get them, too (bringing the per-user cost to $18 and $30, respectively). In either case, you'll need to buy the hardware (or Horizon DaaS) to host your desktops. Like AppVolumes, it will be available in March.

You'll note that even at the $18/per user, per month price point, Hybrid Mode is about half the price of Citrix Workspace Cloud. I wrote back in December that Citrix had left a lot of room for VMware to undercut them, and it appears they've done just that. I'm sure Citrix knew this was coming because at Summit they announced that CWC pricing would be reduced, though they didn't let on what the new pricing would be. I suppose they were waiting to see what VMware would do and what, exactly, would come with the package. Expect to see a new CWC price from Citrix sooner than later.

Last, but not least, VMware announced Horizon 7, which is also due for release in March. In addition to a tie-in with AppToggle and AppVolumes 3.0, there are two big themes to come out of this announcement: Just in Time desktops and a new, home-grown protocol called Blast Extreme Experience.

Just in Time desktops is the name given to what you may recall as Project Fargo from VMworld 2014. In early August 2015, it was released as a PowerCLI Extension called Instant Clone, but this was more of an early-access experiment than a real product. It works by allowing admins to fork a running virtual machine (called a "Parent VM") rather than taking a full clone. The forked VMs are called Child VMs, and, because of the fact that they are leveraging the memory and disk of the parent VM, they can be created in just a few seconds (or even less in certain scenarios). Each Child VM has it's own delta from the Parent VM, and you can specify unique settings for each Child VM via a "PostCloneScript." Because a Child VM was forked from a running VM, there is no boot up. "Powering On" a Child VM makes it instantly accessible. More information on this can be found in the VMware PowerCLI Blog.

Today, we're finally catching a glimpse of the real deal. With this technology, you can now deploy and update images exceptionally fast without recomposing or re-balancing them. You simply update the master, and the next time a user starts up their machine the changes are there.

The other big news from the Horizon 7 announcement is that VMware has created a new protocol called Blast Extreme Experience. They do NOT call it the BEE protocol, which is good because I can picture all the cheesy marketing right now (Handing out Honey Nut Cheerios at VMworld, Shawn Bass dressing up in a bee costume, etc…). It's called Blast, and though it may seem like it's a brand new protocol, it's something VMware has been working on for several years, tracing its roots at least back to the Horizon View HTML Access protocol from 2013.

VMware developed Blast because they wanted something that could work well from the cloud as well as on-premises, and though PCoIP has done well in both scenarios (well enough, even, for Amazon to use it for AWS Workspaces), they also wanted something that would work well with mobile devices, be more battery friendly, and consume less bandwidth than PCoIP for video. To address those priorities, Blast uses H.264, which is already optimized for video and has hardware-based decoders on just about every piece of hardware you can think of, which gives them the battery life they were looking for as well as the ability to work on very inexpensive thin clients. According to VMware, users can work on battery power twice as long using Blast as they can with PCoIP on the same device.

Blast uses UDP by default, but falls back to TCP if needed. With UDP, they can handle 20% packet loss and still present a reasonable user experience. (That's subjective, of course, but it does show that VMware considers this a modern protocol for use on the LAN, WAN or on mobile networks.) There are no feature gaps between Blast and PCoIP. It supports MMR, USB device, Client Drive Redirection, and all the other features you'd expect, plus it's been developed with support for GPU Offload built in. Deploying Blast amounts to an extra check box when setting up a Desktop Pool and selecting the protocol to use by default. Older clients that don't support Blast will simply fall back to PCoIP or RDP.

I'm not sure what this means for the relationship between VMware and Teradici, though I'm inclined to think nothing will change in the near future. I'll be curious to see how the performance of both protocols compare in the real world before making any judgments. I do, however, think that it was only a matter of time until VMware made their protocol. Overall, though, I think it's a non-issue at this point.

The changes made to AppVolumes are critical given how the App Layering space is evolving. They've done a good job of expanding the platform without adding back in the same kind of complexity we've had for the last 15 years. Even the AppIsolation component only isolates files/registry entries if it has to, rather than by default, and the fact that it does it in a hands-off way is critical.

It's too early to tell whether or not Horizon Air with Hybrid Mode will be successful, but in general I think we're looking at the future of virtual desktop and application management, just as I do with Citrix Workspace Cloud. They are both taking different approaches, targeting different classes of users, but it's interesting to watch as it all evolves. If you're just getting started with VDI, though, it makes a lot of sense, especially if you consider that you're starting with Horizon 7.