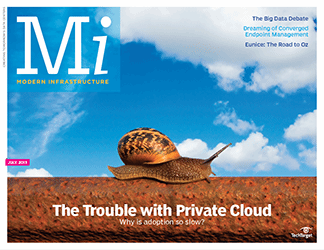 This article is part of the Modern Infrastructure issue of July 2013, Volume 2, Number 7

How many times have we heard that this is the year of VDI? Probably every year since 2006. I have not believed that VDI was ever ready for prime time. (I even co-wrote a book called The VDI Delusion, in which we essentially spent 240 pages explaining why VDI is not that great.) But VDI adoption has changed this year with the advent of two new technologies. The first is around storage. I always argued that virtual desktop infrastructure (VDI) had to be about persistent "1-to-1" disk images, but that doing so with traditional server storage was prohibitively expensive. This is why most VDI deployments have focused on non-persistent "shared" images, and why VDI adoption has remained marginal. Now, vendors such as Atlantis Computing, GreenBytes, Tegile (and probably 20 others) offer block-level, single-instance primary storage. This means you can build a VDI environment for hundreds of users—with each user having a unique disk image—for a price that just last year would have only bought you a shared-image system. The second major ...

Features in this issue

News in this issue

Columns in this issue