Everything you need to know about deploying DaaS 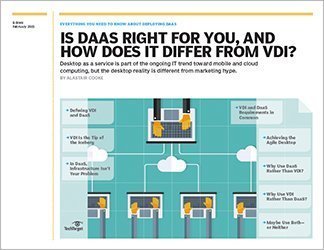 For several years in a row, experts predicted that it would be the "Year of VDI," but that never truly came to fruition. Instead, the industry seems to be readying for the Year of DaaS. To that end, it's important to know how desktop as a service and virtual desktop infrastructure work together. Enterprise IT should also know to pick a provider, work out a mutually beneficial service-level agreement, and what security and compliance issues to be aware of. Get the answers to all those questions and more in this e-book.