This is the fifth article in a series on the basics of VMware View.

At the time of writing VMware Composer and Linked Clones is incompatible with vCenter4. It was not feasible or realistic to delay the publication of this book to wait for VMware to release a new version of View that is compatible. As a consequence the following instructions were tested on Vi3.5 and should once VMware issue a new release of View 3 work in exactly the same way.

As you can see using conventional templates and virtual disks to create virtual desktops does come with some significant disadvantages. Firstly, even with thinly-provisioned virtual disks you can waste disk space on very expensive shared storage. Secondly, although the automated provisioning of virtual desktop pools is efficient it can be a huge storage hit on the array. If you have many desktops to make in a short period of time it can take some time to complete the build process.

With this in mind VMware View introduces the Composer feature and "Linked Clones". The concept is a simple one. You create a single "master" virtual desktop – very much in the same vein that we have covered so far – in VMware Composer this is referred to as the Parent VM. A snapshot is taken of this Parent VM, and then a replica is generated. From this replica linked clones are created. The reason they are called linked clones, is that fundamentally the source of clone's information comes from the read-only replica.

The difference is that rather than using the template process to create a virtual desktop – merely a "differences" or "delta" file is created. Linked Clones are called such because the "clone" is "linked" to a replica of the "Parent VM". In this way we can massively reduce both the storage costs and deployment time significantly. Additionally, it means when we make changes to the master these are proliferated to each of the linked clones – in process VMware recomposing. The virtual desktops are not linked to the parent VM but to the replica – this allows you to reuse the parent VM as the source for other linked cloned desktops. If you are using persistent pools with linked clones the replica disk is marked as read-only, all changes that user makes are sent to operating systems delta virtual disk. Additionally, there is an option "user data disk". This user data disk holds a local profile for the user. The user data disk is marked as being read-write – and the user is allowed to make changes to their profile and environment albeit circumscribed by your Active Directory Group Policy settings. The user disk is automatically created and attached to the virtual desktop at first power on – and is assigned a drive letter that you choose when creating the linked clone.

Such savings in space and time have been around at the storage layer for some time from such vendors as NetApp and their SnapClone and De-Duplication technology. If you have these storage technologies already you may wish to evaluate their effectiveness and cost first – before using the linked clones feature. It's worth saying that these so called "high-level" storage features from the storage vendors are not free and often require a license to function.

Perhaps the best analogy for linked clones – is to compare its utilization of disk space to the way that ESX utilizes memory. If you recall from the performance chapters it is possible to allocate more memory to the VMs than is physical present on the ESX host. VMware call this memory overcommitment. Well, in a very similar way with View Composer we can create more virtual desktops than we have physical disk space. As with memory overcommitment, with disk commitment we must monitor very carefully the actual disk space used – and View Composer comes with built-in settings control what happens if we get close to using more disk space than we have physically available. In many respects it's like having virtual storage on expensive array.

Finally, VMware have developed there only utility to replace Microsoft Sysprep, which is called QuickPrep. As the name suggests the intention is to add a linked clone virtual desktop to Microsoft Domain as rapidly as possible. QuickPrep uses an account in Active Directory which you have configured with rights to join computers to the domain, and pre-populates computer accounts in the domain which significant speeds up the deployment process. In addition, QuickPrep allows the administrator to specify using the Distinguished Name format (e.g. OU=Virtual Desktops, OU=Marketing) where those computer account objects will be created, thus ensuring the right Active Directory Group Policy objects are correctly applied.

For linked clones to be possible you must install the VMware View Composer Service to your vCenter server. View Composer does need a backend database and it is possible to simply create a new database on your existing database server that use to hold the other VMware databases for features like vCenter and VMware Update Manager.

Prepare Parent VM
The Parent VM forms the base of the virtual desktop pool using linked clones. It's probably a good idea to create a brand new VM from one of your templates that you know works without error.

The vCenter Environment after using Linked Clones
In the section I just want to very quickly tie up some loose ends in terms to the changes created by View Composer and the Linked Clones feature. I firm believer in mapping abstract concepts to something tangible that you can see on screen. Most people learn by doing and seeing – rather than just dry and abstract explanations based on pure theory.

In Figure 14, you can see that the system is still busy in creating my "marketing" desktops. 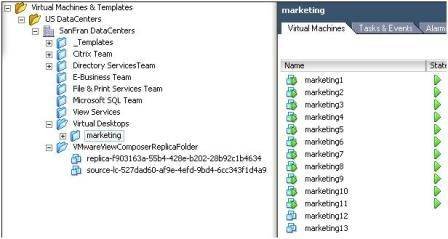 I actually asked for a maximum of 50 desktops in the pool, with minimum of 25 and reserve of 10. Notice how it created a VM folder called marketing, and Replica and Source in the VMwareViewComposerReplicaFolder. View composer appends a unique string to the end of the Replica and Source so they can be unique tied to the clones (marketing1, marketing2 and so on) that have been created.

If I use the data store browser to examine the location selected for the OS data -- in my case I selected sanlun1 -- you can see in Figure 15 that each of the linked clones delta virtual disks take up a very small amount of space.

As you can see, the linked clone called marketing1 is only using 32MB of data, in fact its virtual machine swap file is larger than the virtual disk containing the desktop.

Similarly, the virtual disk which holds the User Data Disk on the "virtualdesktops" VMFS volume are very small indeed, in this case around 26MB in size, shown in Figure 16.

Finally, in Active Directory – because I set appropriate values for QuickPrep – the OU called "marketing" has been populated with computer accounts valid for each virtual desktop created, shown in Figure 17. 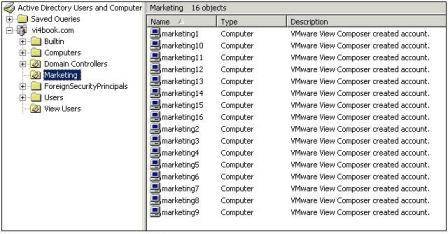 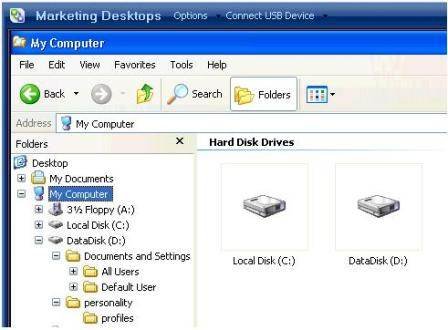 In the next section, learn more about VMWare Composer and Linked Clones.

GETTING STARTED WITH VMWARE VIEW